All articles tagged with "Chokehold"

Mistress Bianca does not look strong at first glance but she is tougher than she looks. She wrestled this guy and he did not take her seriously. When he realized she was strong and tough, it was too late and she had leg scissored him and she choked him as a result. She only stopped when he cried and begged her to stop. He moved out of town as he could not stand the humiliation and shame he felt. 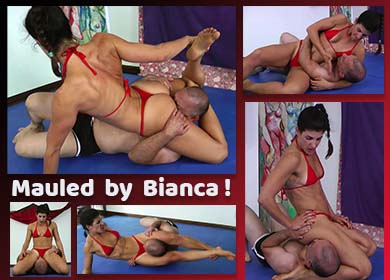 When this guy set out to blackmail mistress Vicky, he did not know that he was getting himself into a lot of problems. She had to deal with him and she did so using her wrestling fetish. She choked him with her leg scissor and she also used mixed martial arts to torture him. That is how he learned never to mess with her and to do what she wanted.

Mistress Goldie had been training for months and she wanted to find out how good she was and what progress she was making. That is why she chose to test herself against her coach. The mistress and her trainer wrestled for long and it was almost even but she was determined to be better than him. And her determination paid off when she managed to win by pinning him down and holding him with a vice like grip 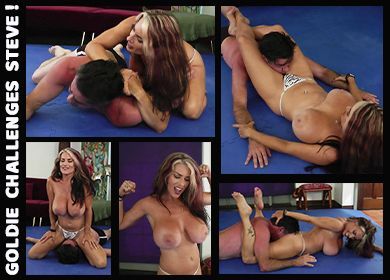 Mistress Mia and mistress Ariel found out that they were both seeing the same guy and instead of being pissed at him, the mistresses were pissed at each other and the mistresses fought and wrestled after a war of words. They were each trying to make the other stop seeing the guy but after they facesat, pulled hairs, slapped, punched and kicked, they did not have an outright winner and they waited for the guy to choose.

Lady Zora wanted to pass time as she did not have anything better to do. She felt that the best thing to do to achieve that was to wrestle her boyfriend. He had no idea she was a tough opponent. But he was shocked at how she was strong and he could not break free from her grip. That made him see her in new light and he never angered her.

Mistress Kate and her boyfriend are all fitness enthusiasts and they also share a love for wrestling. So today they had a wrestling date where they tried all kinds of new wrestling techniques. They were not really wrestling but rather they were teaching each other about those skills and techniques. It was a lot of fun and it soon became a turn on for both of them and they soon turned it into foreplay.

Mistress Melanie did not like how this neighbor acted towards her. He was always opposed to everything she did or said and he was being a nuisance. He was always looking for a way to have an issue with her and she could not stand it. Today she used her martial arts skills to beat up his ass. He tried to wrestle her but she overpowered him and she punished him painfully. He stopped that behavior.