All articles tagged with "Pussy"

Mistress Xana and mistress Veronike were both broke and they wanted some money. But instead of that, this guy asked them to wrestle while naked and that they would get money if they did it. They all agreed and that is how they got some money but after they had entertained him with their naked wrestling. He loved it so much that he made it a regular thing for himself.

This mistress felt that it was important for this loser to be taught a lesson in good behavior. He was ill behaved and she did not like it. So she used her bare feet to trample his nuts and she made sure he learned his lesson and that he never messed up with her. He was remorseful as he knew it was a war he could not win. And that is how he changed.

Mistress farts on guy after defeating him

This mistress knew that she had to change tact in order to win against this guy. So the mistress went ahead to remove her clothes and she let her big ass and her big boobs to be her distraction of him. She proceeded to wrestle him and he was in pain. And once she was done, she farted on him for good measure. He ran away as fast as he could.

Mistress Zora facesits on boyfriend and farts on him

Mistress Zora wanted to use her facesitting fetish to dominate and to humiliate her boyfriend because he had angered her. The mistress choked him with her thighs and when she was done, she used her farts to degrade him further. He was shocked at how strong she was as well as the kind of things she did to him. The boyfriend regretted what he did and asked her for forgiveness.

Madam Mysteria wanted this guy to learn how to wrestle as she felt that he was too weak to fight anyone. So she tried to teach her techniques that would help her win against his opponents with little effort and more skill. The mistress wrestled him and she beat him several times before he got the hang of what she was trying to teach him. But when he understood her, he started becoming good.

Mistress Mysteria did not like how this girl did not respect her. She was bothered by it because she had not done anything to the girl but she was trying to go out of her way to be disrespectful to her. So she put a stop to that nonsense by wrestling the girl and dominating her. She could not handle madam Mysteria and she humiliated her and made her cry and beg her to stop.

This guy thought that just because he was muscular, he would be able to have her way and also dominate or win against mistress Veve. He did not take her seriously when she told him she was looking forward to wrestling him. When they finally did, he tried to go easy on her but it was too late as the mistress held him in a tight grip that he could not get out of. 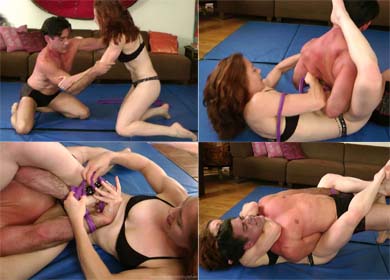